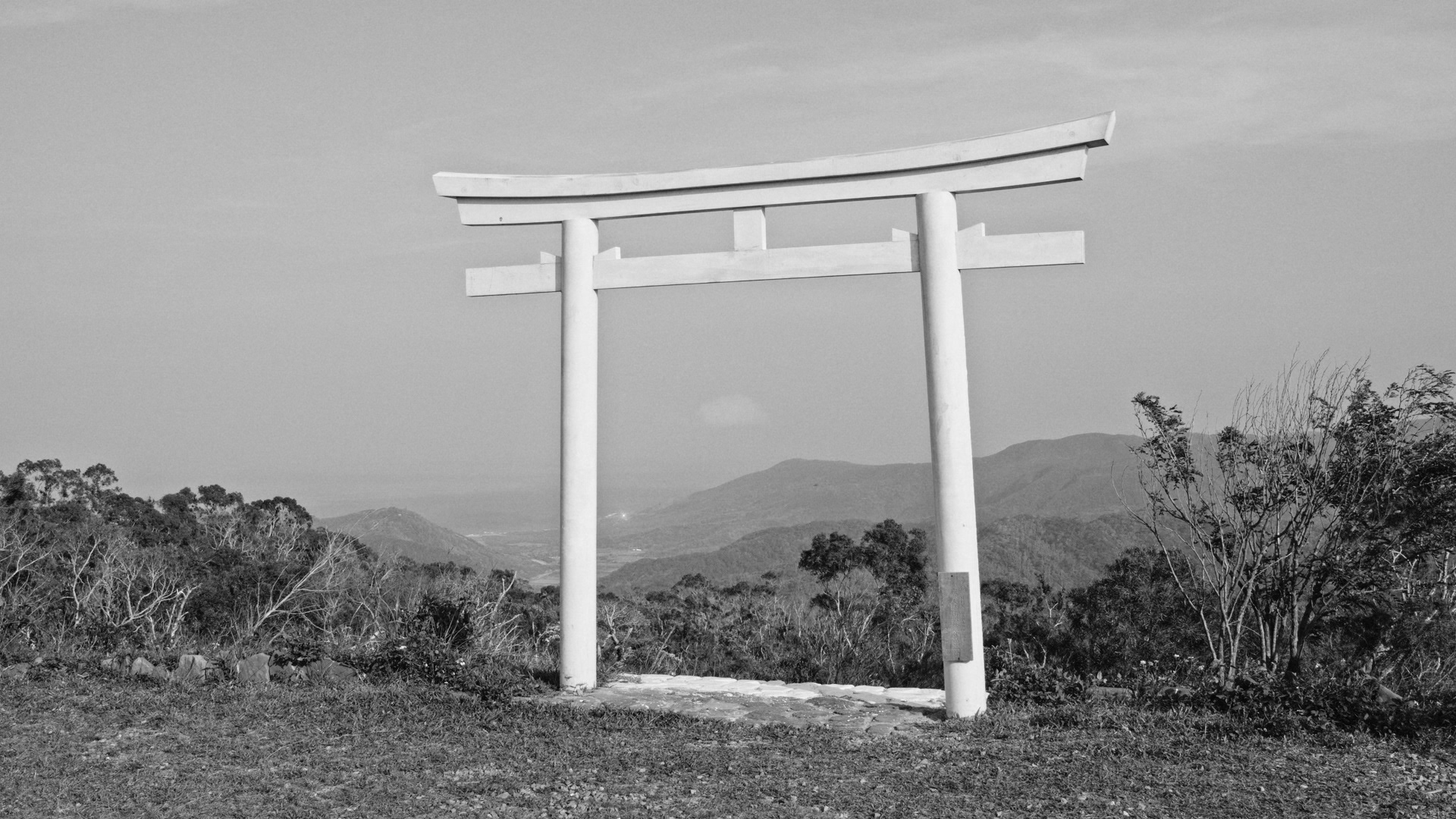 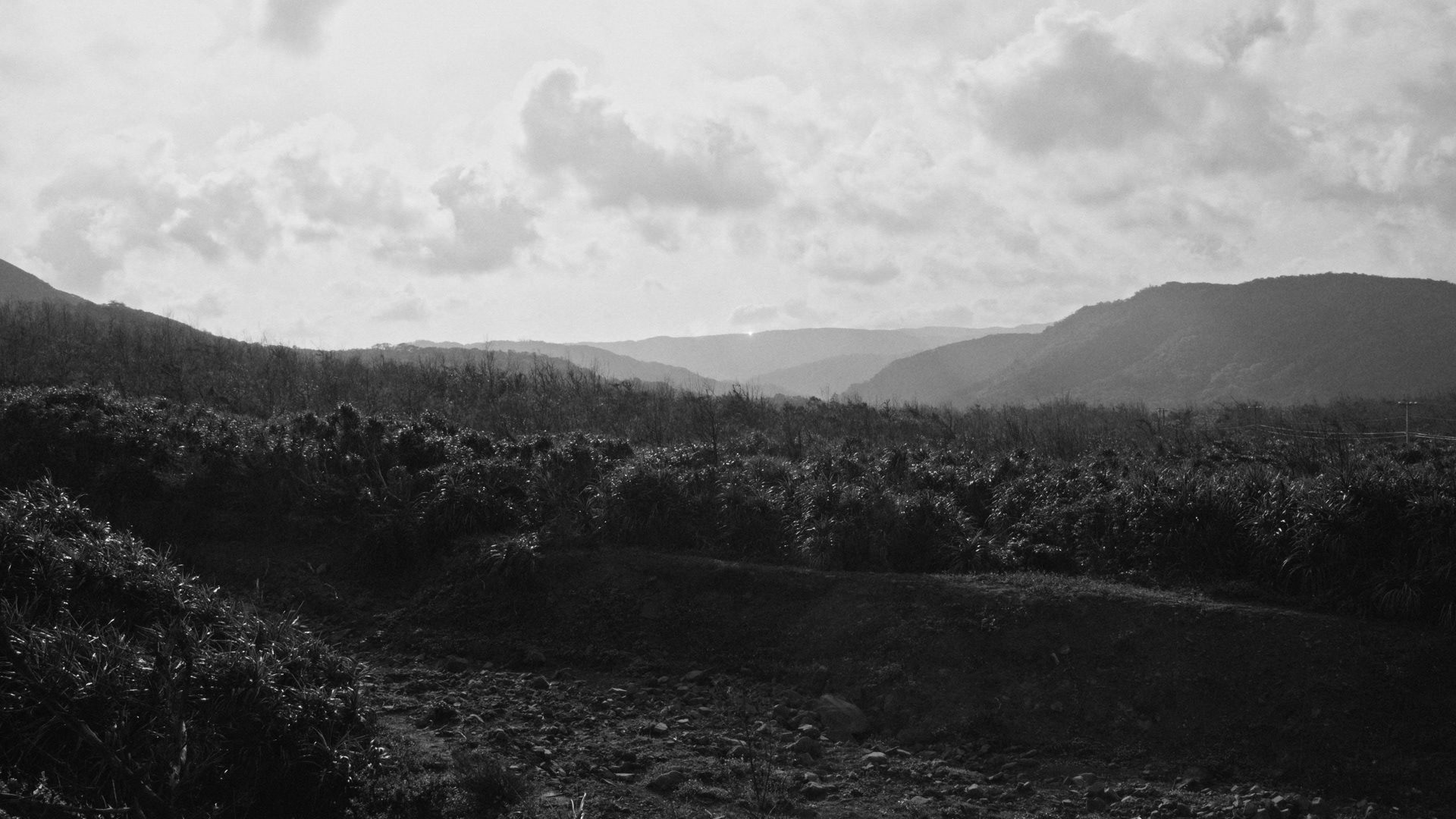 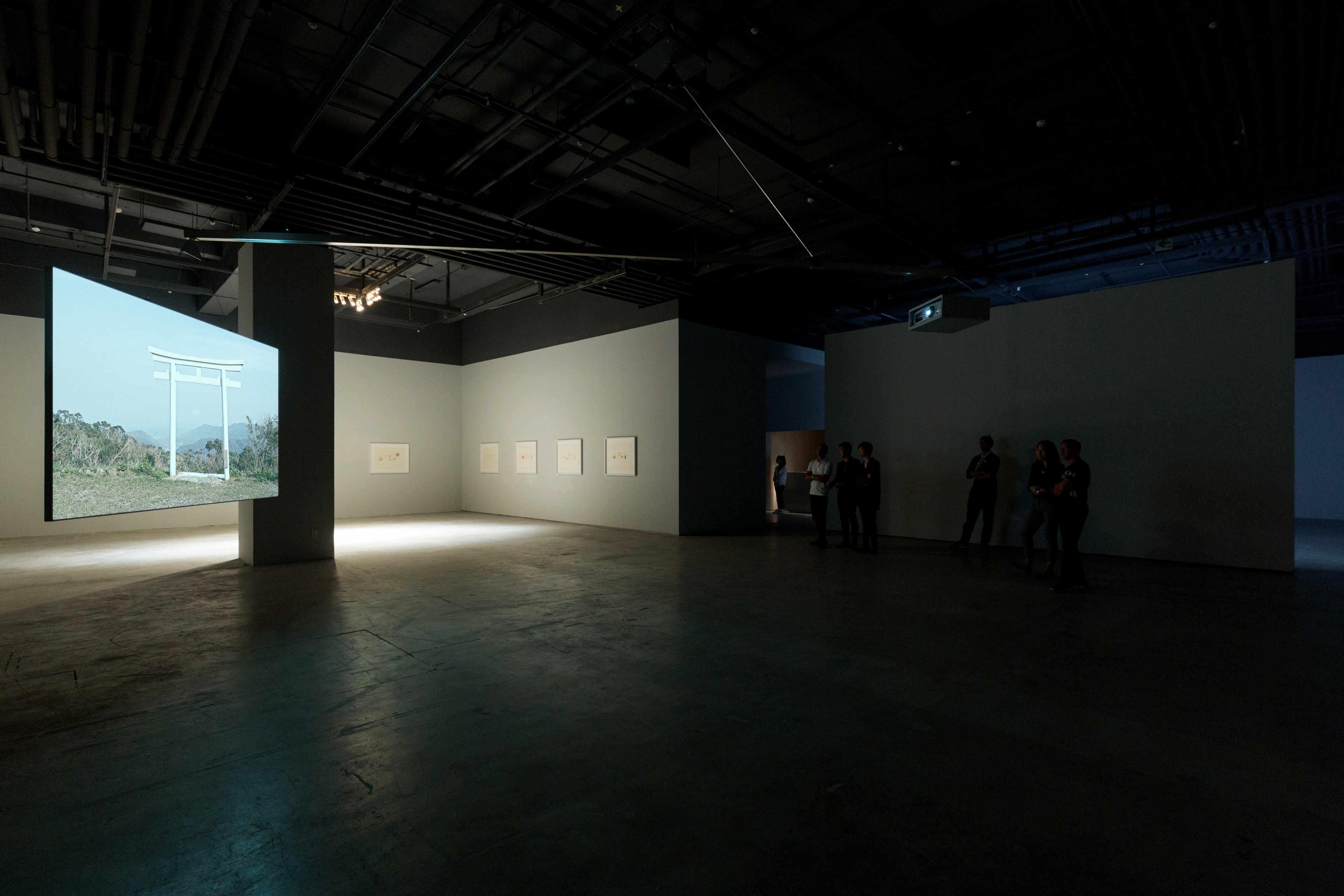 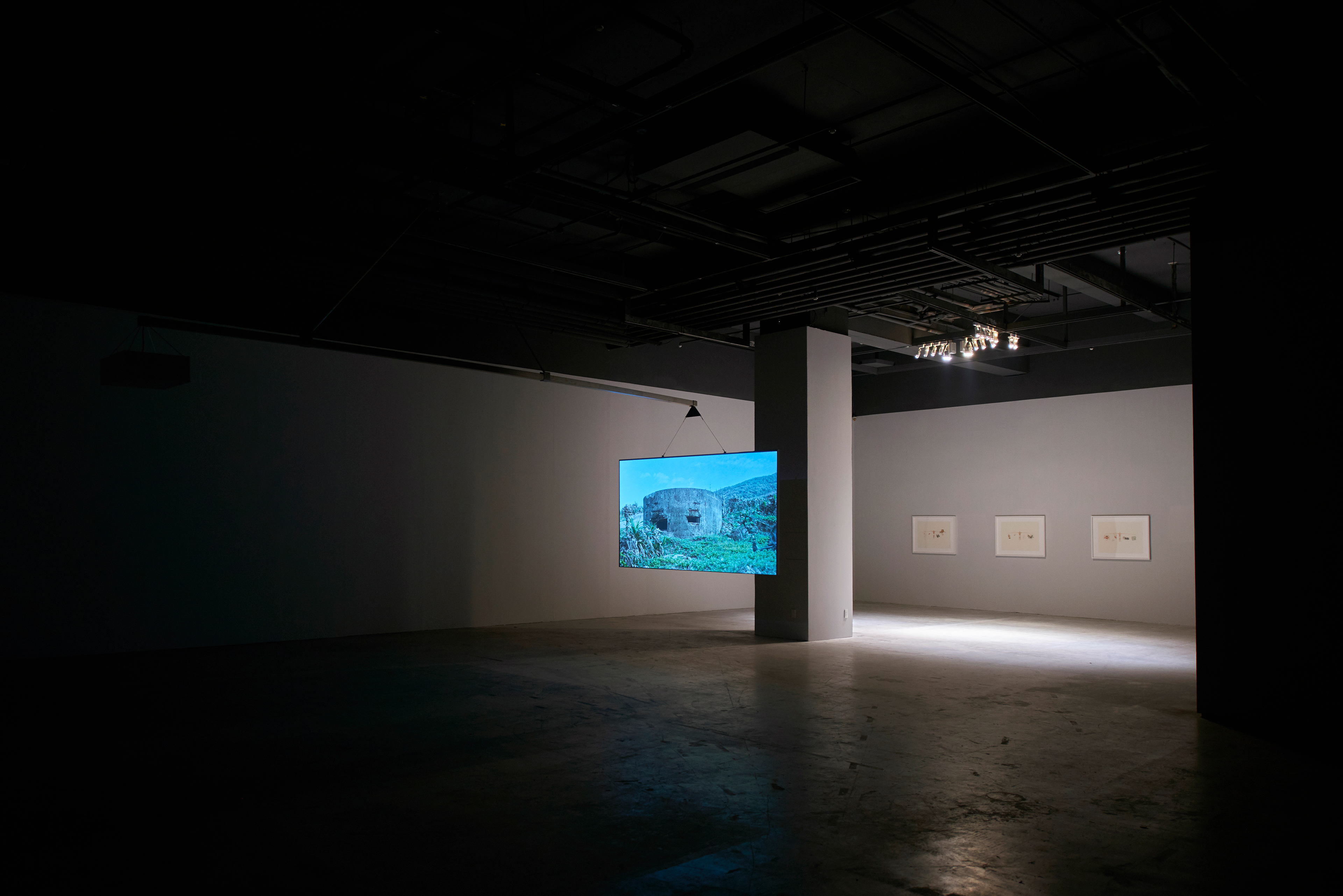 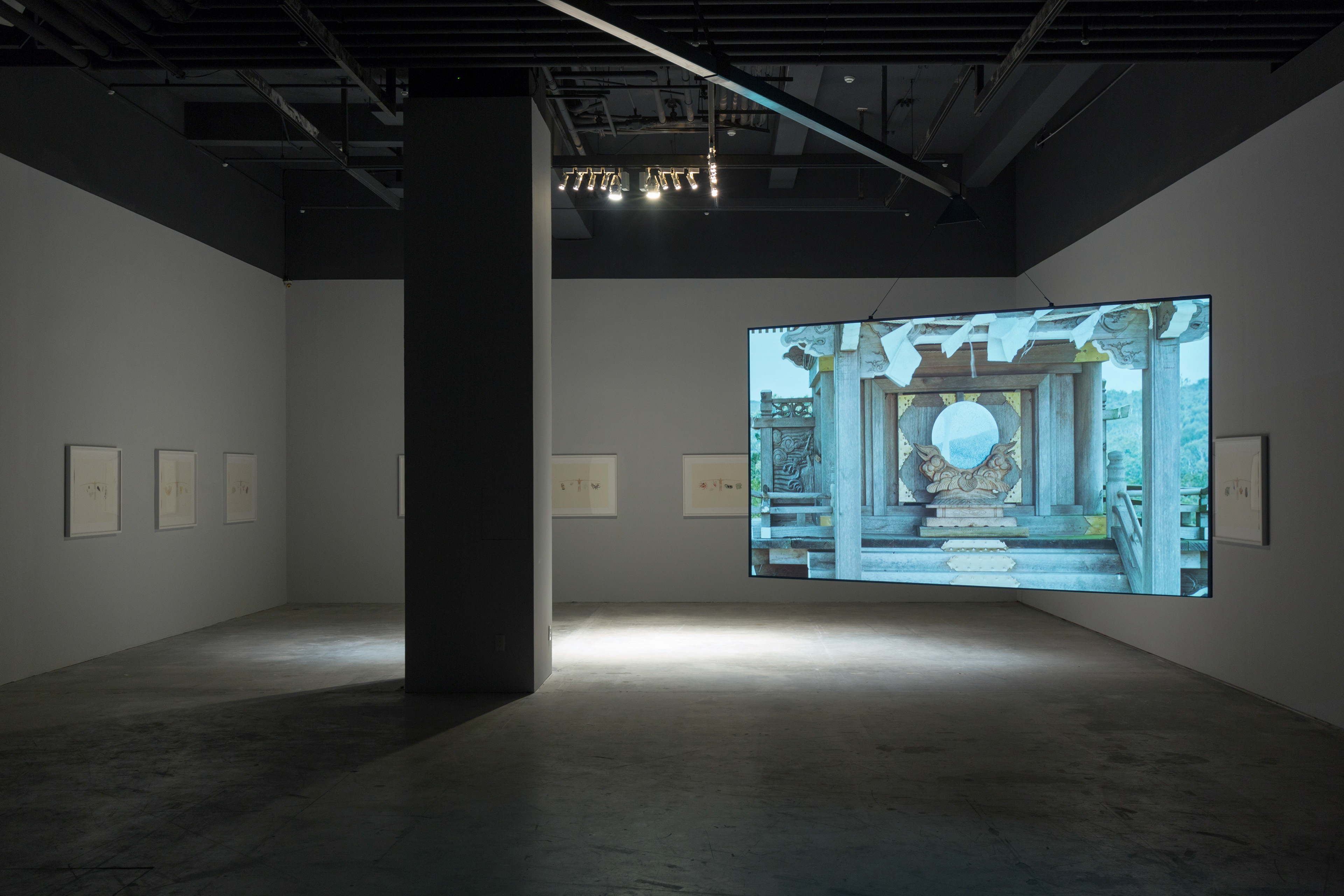 This kinetic video-projection installation completes a full counterclockwise rotation each hour, allowing the audience to perceive actual physical time. The video recording has been divided into four sections of silent footage that gradually shift from black-and-white to full color. The images have been constructed using two sets of cameras: one set positioned at the Kusukusu Jiniya Shinto shrine on the mountain’s summit pointing toward Padriyiur Bay, the other set of cameras point toward Kus Kus Village from Padriyiur Bay; manually-operated flashes of light in the film emit series of Morris codes. Codes originating from the bay lists names and basic records of survivors of the 1871 Padriyiur Bay Incident, for instance, “Hirara Niya, Alive, in exchange for a cow” or “Shimabukuro Kame, alive, left documents”; codes dispatched from the summit toward the bay describe photographs (currently archived in the Pitt Rivers Museum of Anthropology at Oxford University) from the 1910 Japan-British Exhibition attended by Japanese officials and residents of Kus Kus Village, with content such as: “a wedding between Lungaya, 21 and Rechabury, 24, is performed as a show at the Formosan Hamlet on Sep 3, 1910.”
This location was chosen not only because of its relevance to the two historical events above, but also because in 2015, Kus Kus Village undertook the reconstruction of the Kusukusu Jinjya shrine to recall the souls of loved ones from the Second World War.  Though no longer a shrine to Amaterasu as it was during the Japanese Imperial Era, this is nonetheless the first Shinto shrine to be reconstructed and to host a ceremony in Taiwan after World War II. Furthermore, subsequent to a 2009 television documentary for NHK Japan of the 1910 Japan-British Exhibition, where the father of the Tribal Elder was brought along by Japanese officials as an exhibit, the Tribal Elder disagreed with the “Human Zoo” narrative perspective in the film, resulting in a lawsuit against the station in Japan. The tribe lost the court case in 2016, but the organization representing the tribe in the litigation began a fundraising effort which resulted in the construction of a torii gate in 2016. The construction of both the Shinto shrine and torii gate were completed in Japan and shipped to Taiwan.
Through this work, the artist engages in a discussion of physical time and temporal concepts for understanding historical events by using informational remnants of a specific location through this work, and examines how this affects the ways in which representative meaning of symbols can be discerned in the process of moral and aesthetical construction.
↑Back to Top