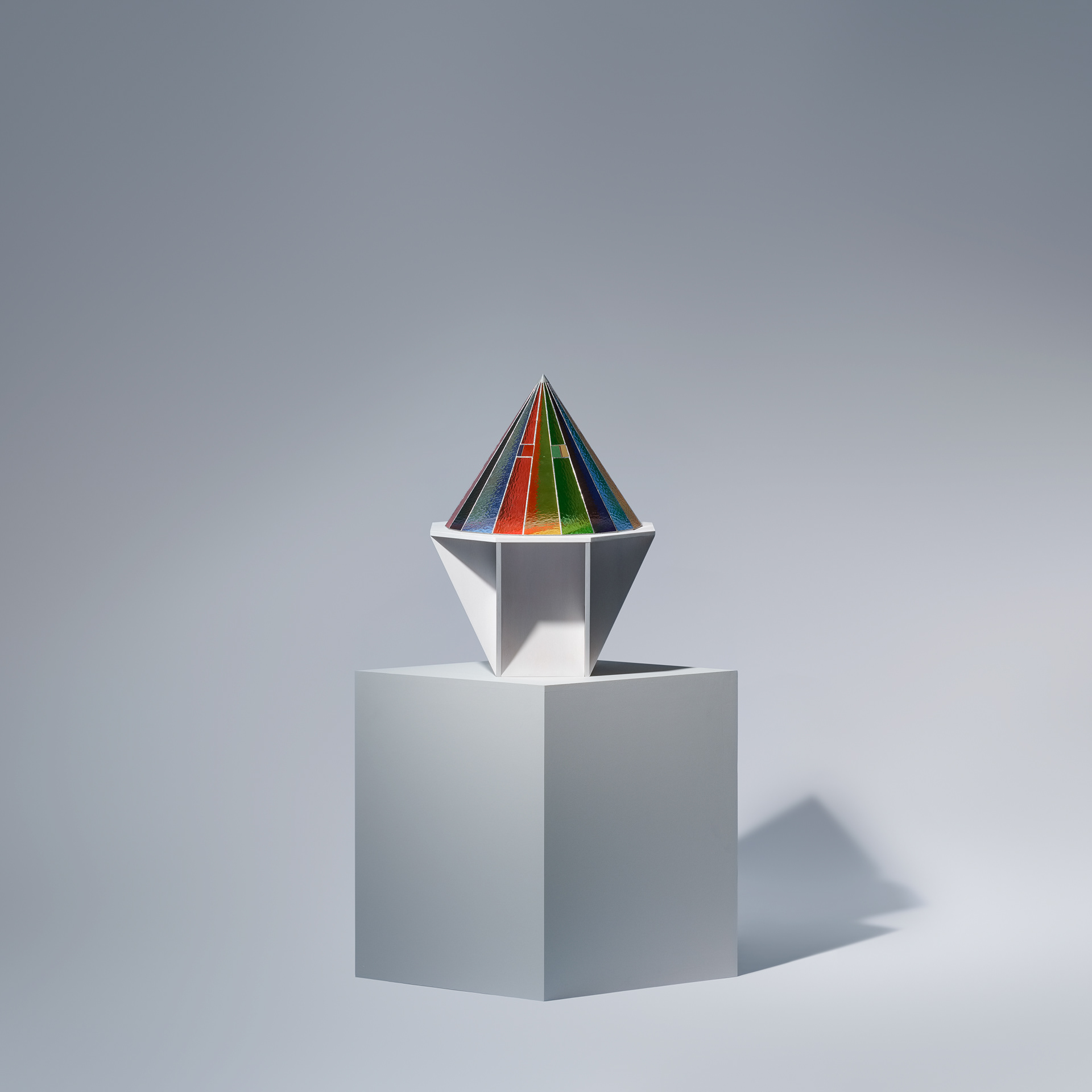 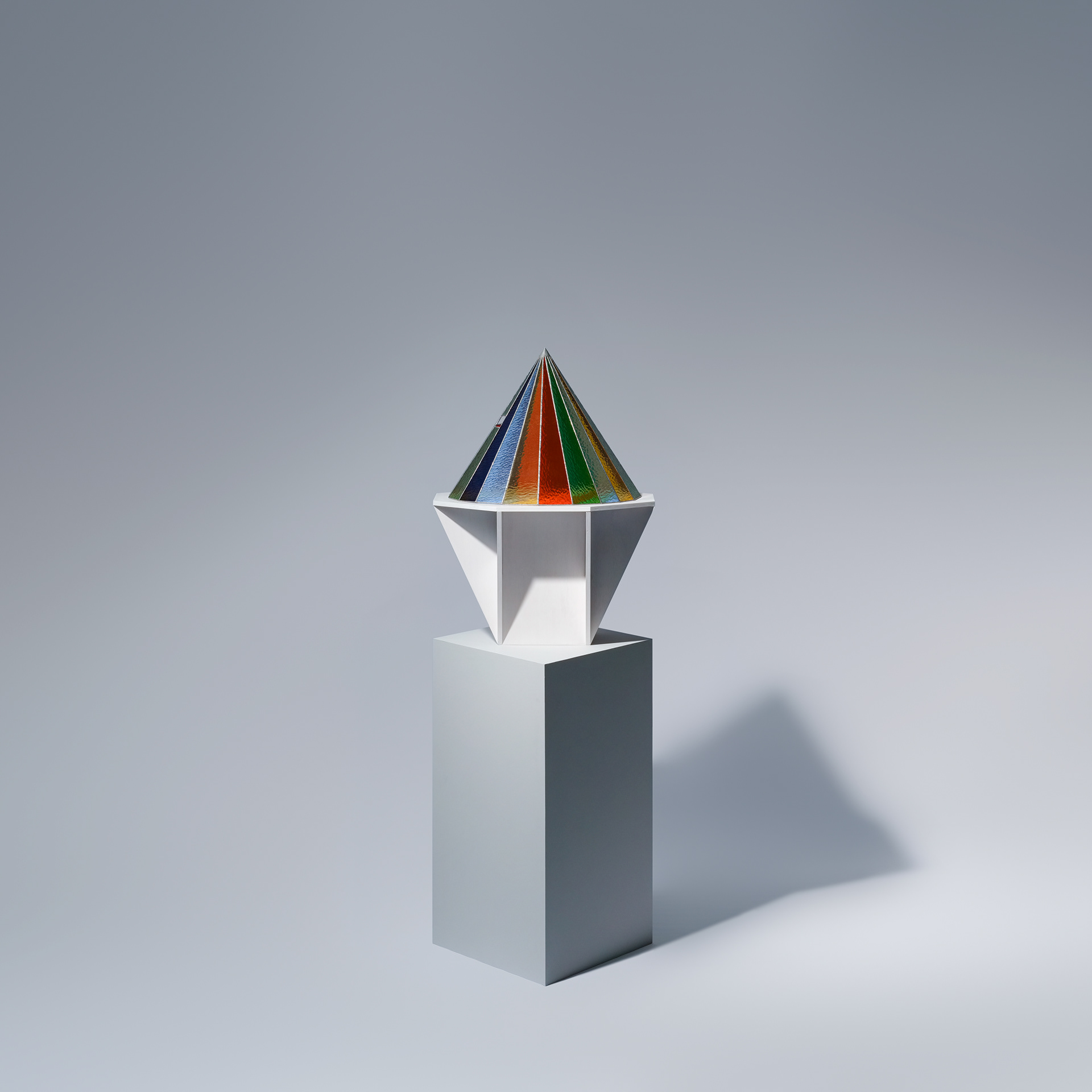 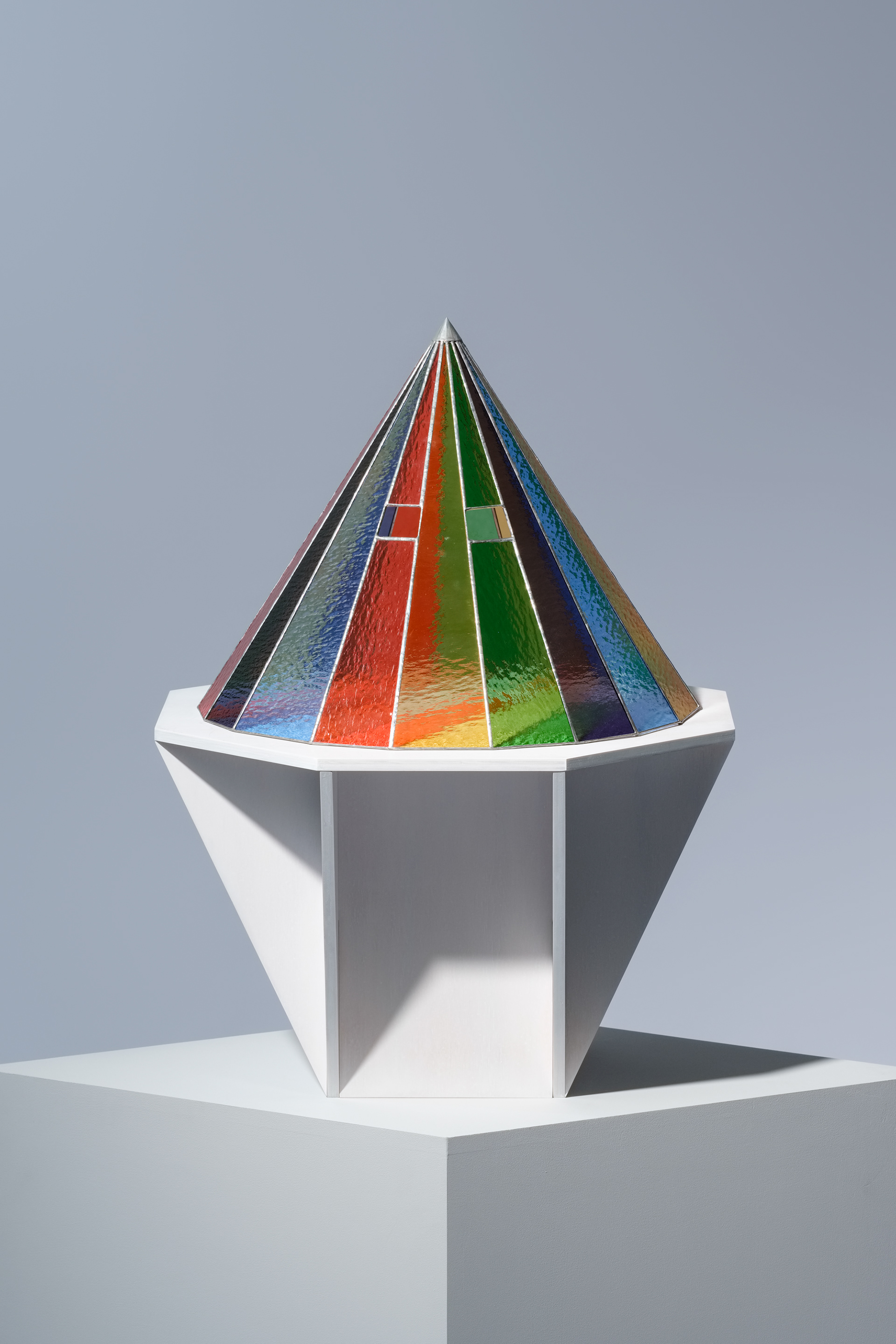 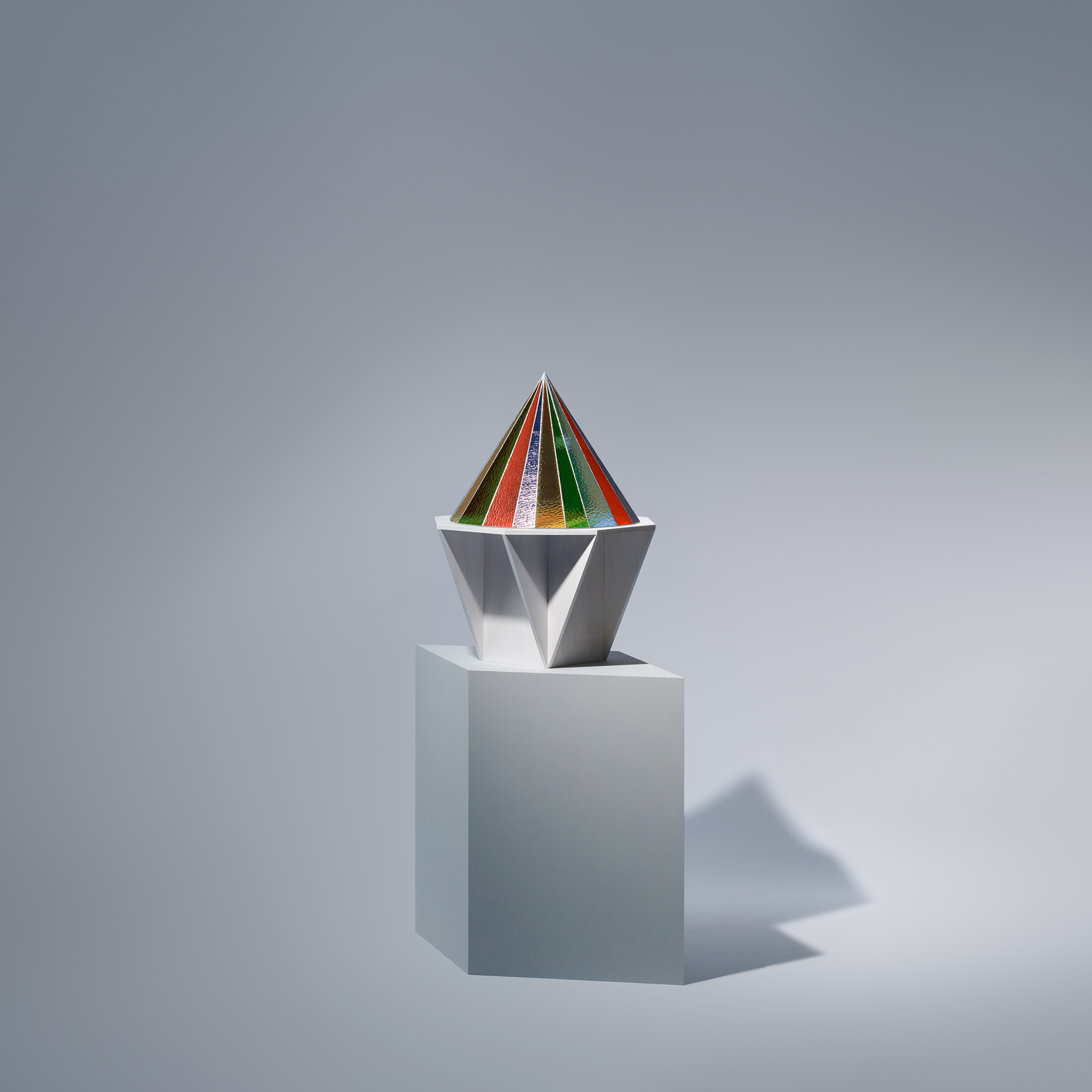 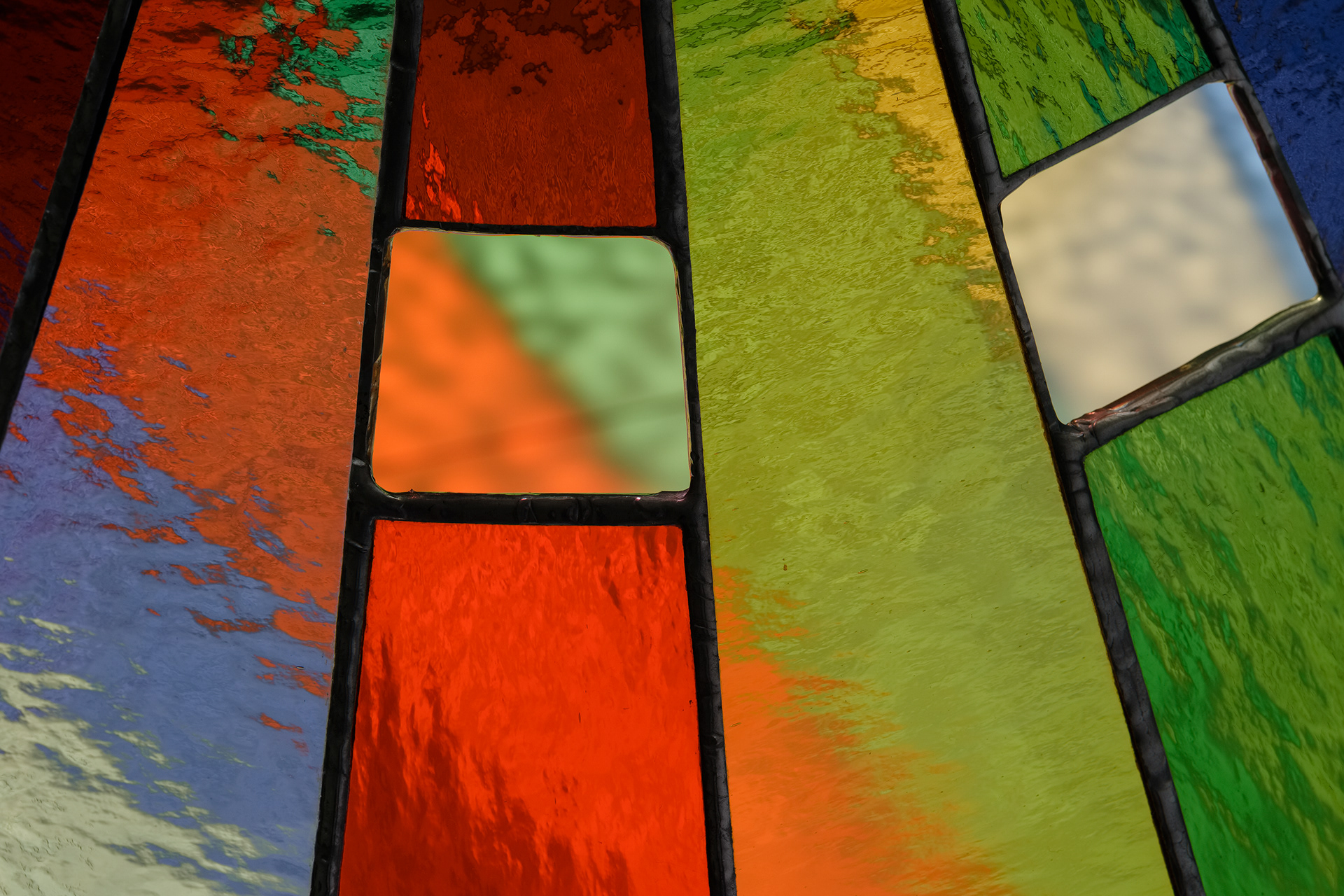 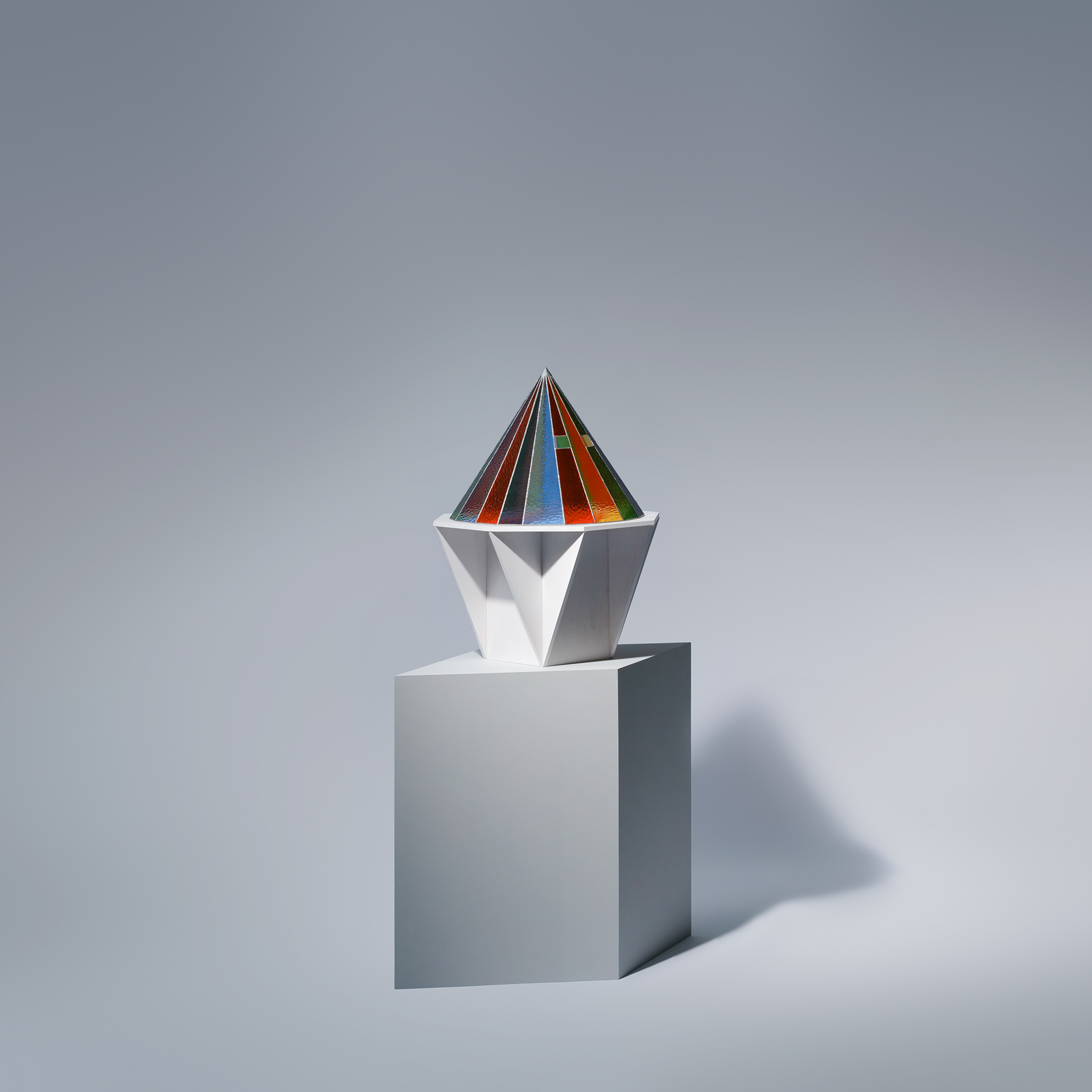 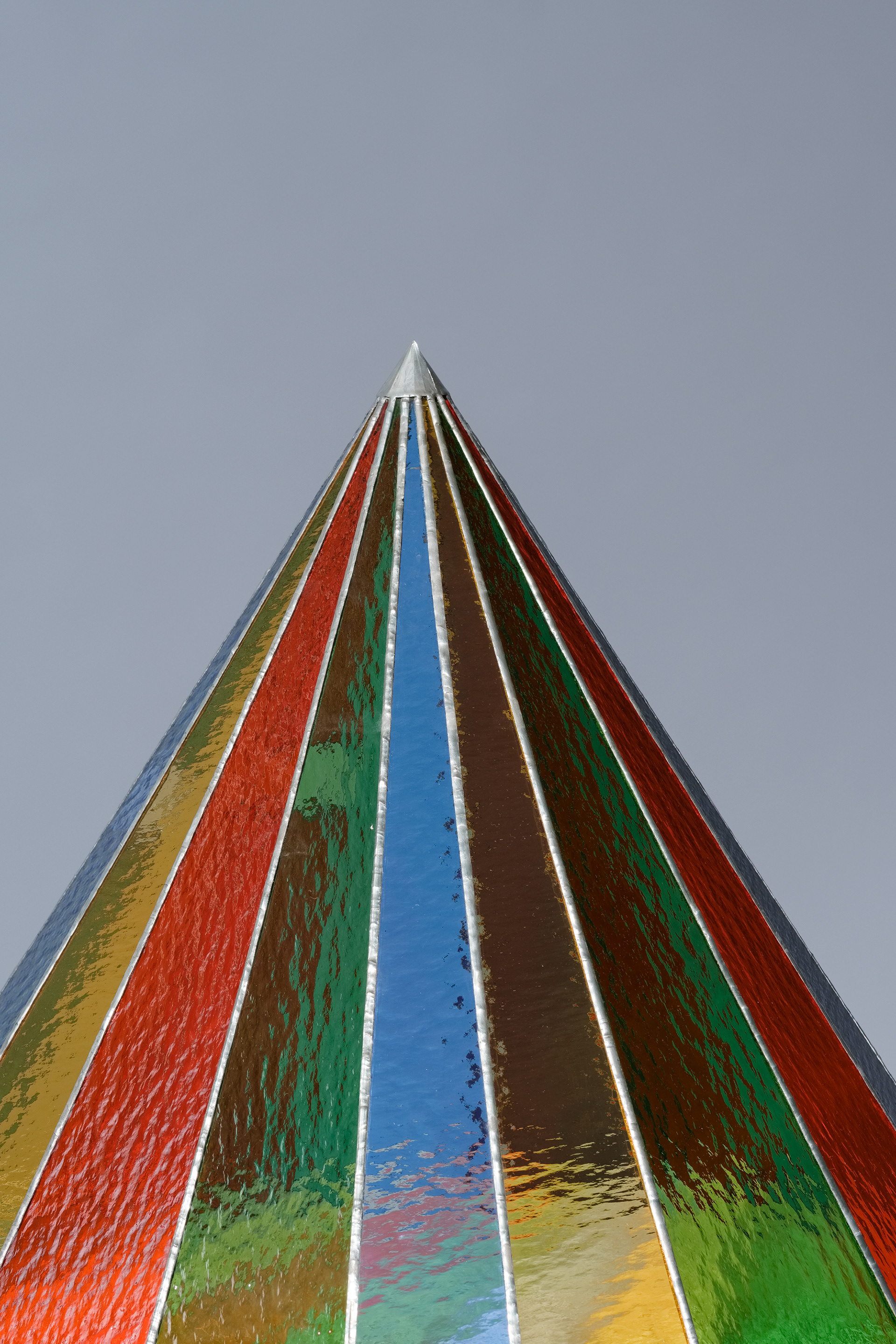 Work description:
Inspired by the scientific pioneers during the era of neo-imperialism, these two conceptual sculptures reexamine today’s economic system and cultural status quo from a perspective of research and pure aesthetics. The structure of the works resembles the form of a totem pole and is divided into three parts. A rough-edged shipping crate serves as the basis of the structure. Its middle section is a hand-dyed pedestal built with joinery. The helmet-looking mystical object at the top consists of stained glass, often seen in church windows. The rituals of transportation, assembly, and stacking hint at the inevitable collision between regional culture, aesthetics and religion as tectonic shifts occur in economy, faith, and politics
The Front, Back and Side of Mr. Torii Ryuzo and Autonomous Structure is composed of a nineteen-sided cone mounted with stained glass, an octagonal pedestal built with joinery and dyed white, as well as a shipping crate. The stained glass that comes in yellow, orange, green, blue, and purple shines under the light, reflecting the colors of tropical terrains. The diamond-shaped pedestal portrays an image of refined culture. The work’s title links the aesthetic approach in Torii’s photography of the front, side, and back of Taiwanese aboriginals with those in viewing a sculpture. Torii’s research broke away from the need of imperial expansion despite that anthropology originated as an extension of such imperial need, and gradually moved into a pure and autonomous state.
The crates, pedestals, and helmets are deliberately designed as movable objects that are easy to transport, assemble, and exhibit. This presentation not only resonates with Marcel Duchamp’s La Boîte-en-Valise — where Duchamp turned the work into a storage and exhibit unit which acts as a box for moving purposes — but also evokes the exotic world fairs held in the age of neo-imperialism imbued with neo-liberal ideology, where the behavior of collecting was manifested in fetishism. Such examples include the World’s Fair: Columbian Exposition in 1893 in Chicago, the Japan-British Exhibition in 1910 in London, and the Indochina at the Colonial Exhibition in Marseille (L’Indochine à l’Exposition Coloniale à Marseille) in 1922 in Marseille. Ensconced in expandable and collapsible shipping crates, these two sculptures become a clever manifestation of primitivism, geometric abstraction, modernism, highbrow, lowbrow, cultural colonial history, as well as the production of contemporary art.
↑Back to Top